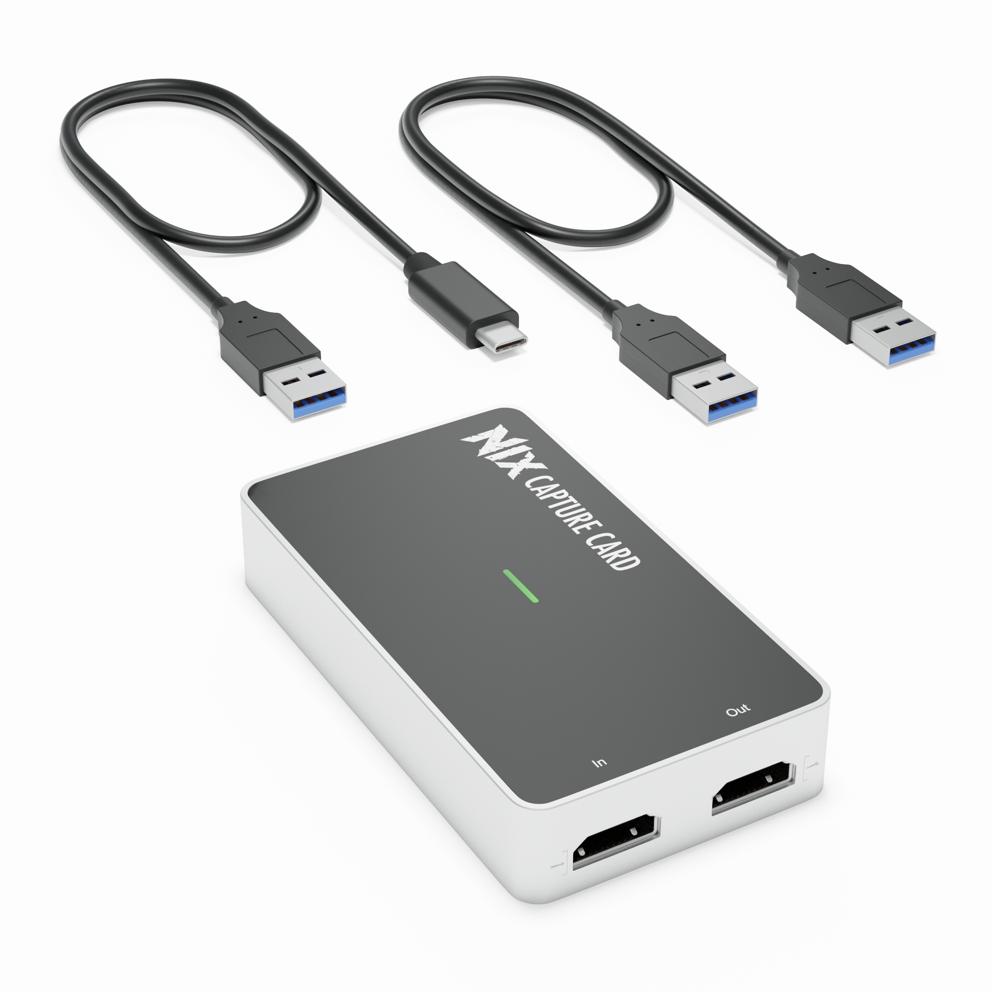 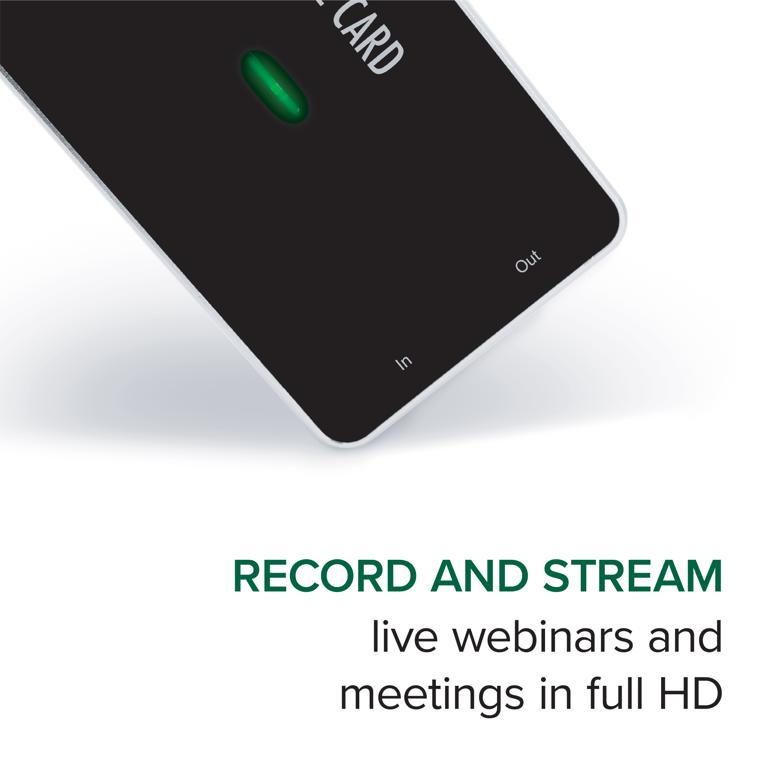 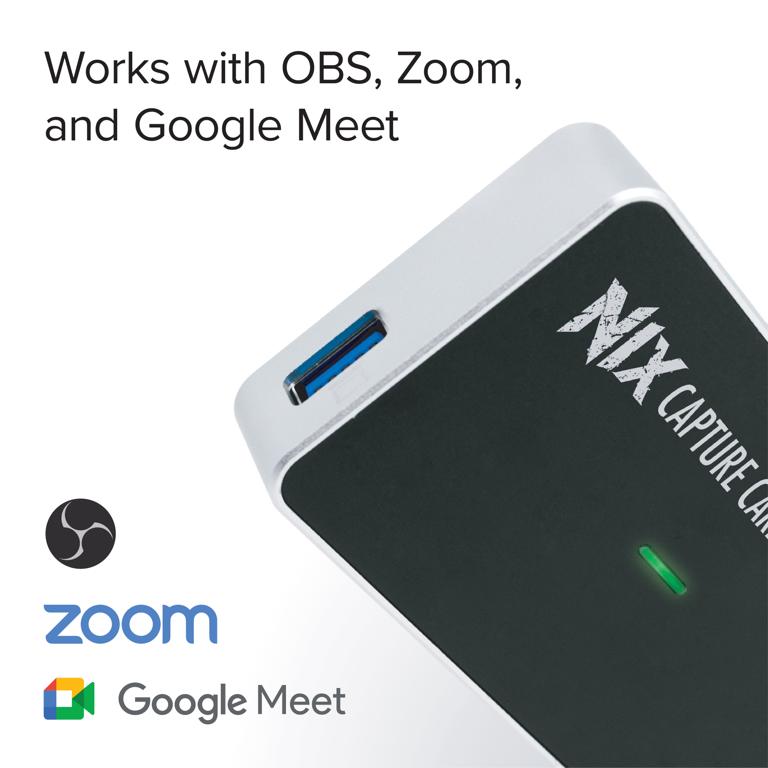 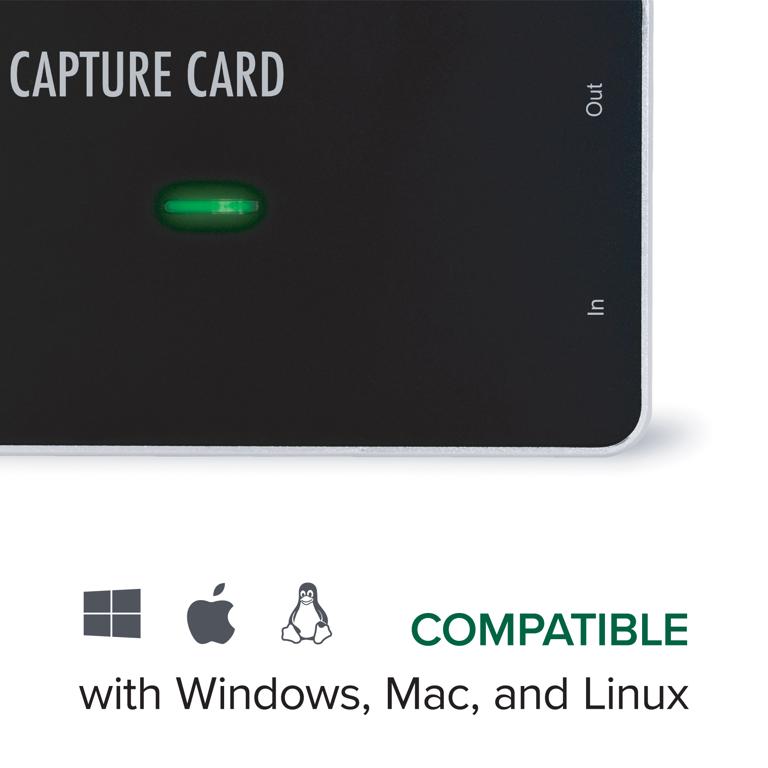 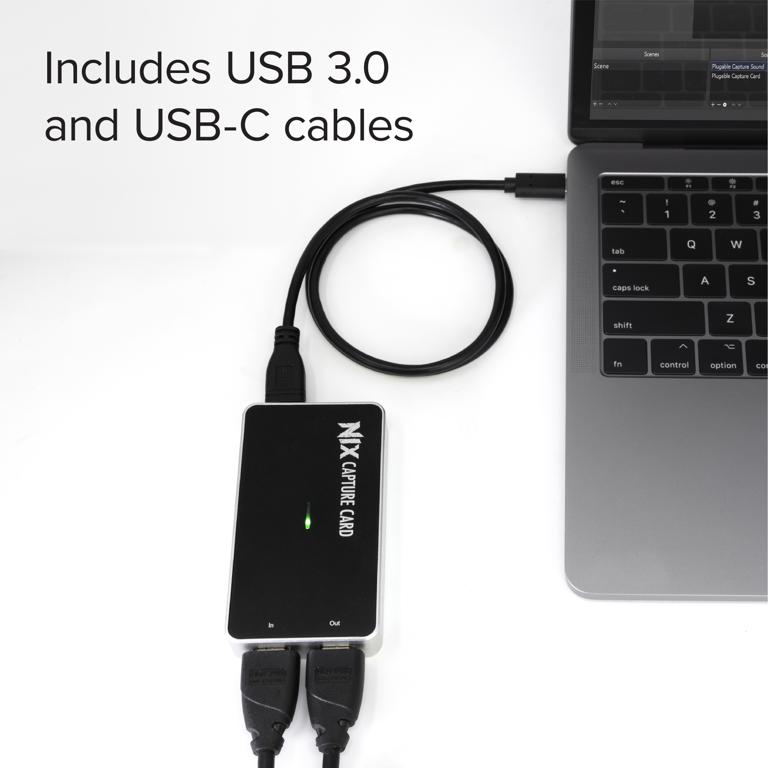 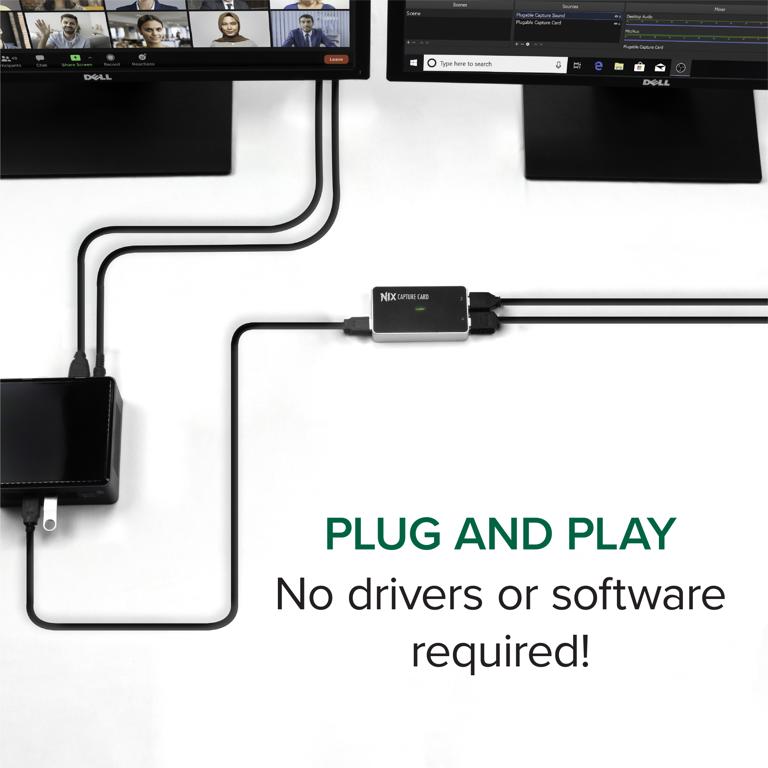 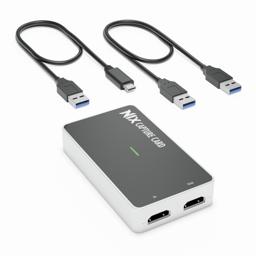 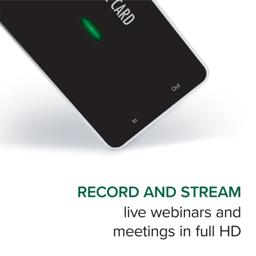 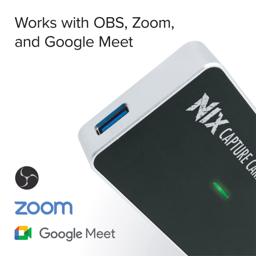 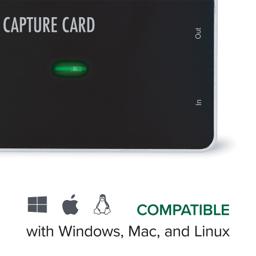 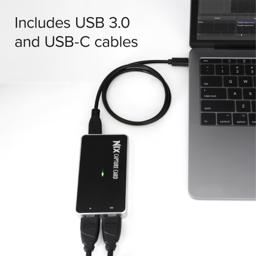 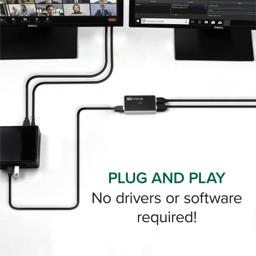 Whether you’re streaming on Twitch, YouTube Gaming, Mixer, or preparing footage for upload, the Plugable Performance NIX Capture Card features the ability to capture at 1080p and 60 frames per second, a no-latency HDMI display passthrough, and low system resource usage.

Record and stream exciting moments, full playthroughs, and more—from popular consoles like the Xbox One, PlayStation 4, Nintendo Switch, or even your PC! The capture card uses drivers built into modern operating systems (Windows, macOS, and Linux), and works with popular open streaming solutions such as OBS, XSplit, and more. No proprietary bloatware. Minimal system resources required. Game on!

For step-by-step instructions on setting up the capture card with Windows, macOS, or Linux and a wide variety of popular supported sources (Xbox One, Xbox One S, Xbox One X, PS4, PS4 Pro, Nintendo Switch), and other important information, please see the 'Get Started' and 'FAQ' sections of this product page.

Note: The input does not allow recording from HDCP-enabled sources such as Blu-ray players, set-top boxes, older consoles with HDMI output (i.e. PlayStation 3 or Xbox 360), or streaming devices. The PlayStation 4 must have HDCP manually disabled in its settings. 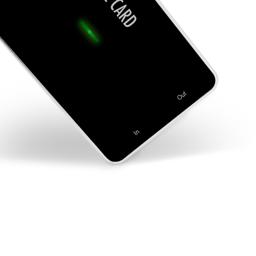 The NIX capture card works with popular software streaming solutions such as OBS, StreamLabs OBS, and XSplit on Windows, macOS, and Linux!
Streaming, capturing, and pass through are supported at a max resolution of 1080p 60Hz (1920x1080 @ 60Hz), via supported streaming platforms such as Twitch, YouTube, or Mixer. 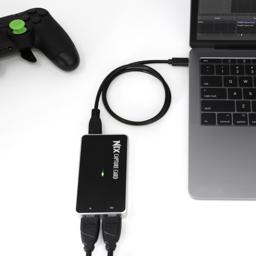 HDMI 1.4 Pass Through with Near-Zero Latency 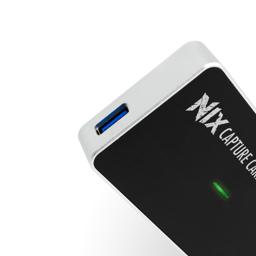 The NIX capture card includes both USB-C and USB 3.0 (USB-A) cables, so you can connect to virtually any modern Windows, macOS*, or Linux system with USB 3.0 (or higher) ports.
USB-A is the traditional rectangular USB port. USB-C is a newer standard with an oblong oval-shaped connector found on more recent computers. Thunderbolt 3 ports also function as USB-C ports.
USB 3.0 is also listed as USB 3.1 (Gen 1)/USB 3.2 (Gen 1) by some computer manufacturers. USB 2.0 connections will limit capture quality.
* Mac systems can be used for recording other platforms but are not compatible as input source. 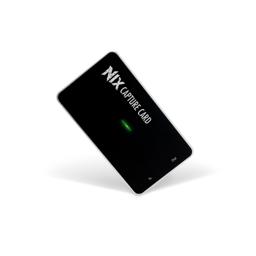 Plug and Play, Not Proprietary

By utilizing built-in drivers in your operating system for direct capture, you don’t have to take away from battling it out online trying to manage clunky additional software or drivers.
With the lowest resource usage around, the NIX capture card doesn’t waste precious memory capacity or CPU/GPU performance to capture your gaming footage. 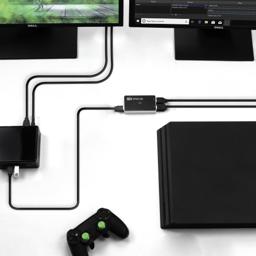 The NIX capture card is able to capture HDMI output from popular gaming consoles such as PlayStation 4, Xbox One, and the Nintendo Switch!
Note: macOS, and platforms which require High-bandwidth Digital Content Protection (HDCP), such as Blu-ray/DVD players, Roku, Netflix, etc, are not supported as sources. Older consoles such as the Xbox 360 and PlayStation 3 require HDCP on their HDMI outputs and are not supported.
The capture card uses Frame Rate Up Conversion (FRUC) to take input from the source platform (PC, Xbox One, PlayStation 4) and upsample the video to 1920x1080 at 60 frames per second. In some cases streamed text may appear smaller in appearance compared to the pass through display. 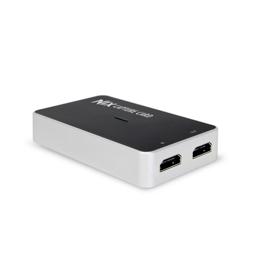 The Plugable Performance NIX HDMI Capture card is compatible with popular streaming software on a variety of platforms for capture. OBS (Open Broadcaster Software) is likely the most popular choice, but there are many others such as XSplit and Streamlabs OBS.

The capture card presents as a webcam to the operating system, so virutally any software capable of accepting a webcam input will accept video from the NIX capture card.

The table below breaks down which HDMI sources are supported by the NIX capture card, and which features cannot be used with the capture card.

For experienced streamers, or those who just want the gist of how to configure the capture card. Here are the key steps to getting ready to capture.

If you need more detailed guidance with screenshots of various processes, try our detailed guides for Windows, macOS and Linux. 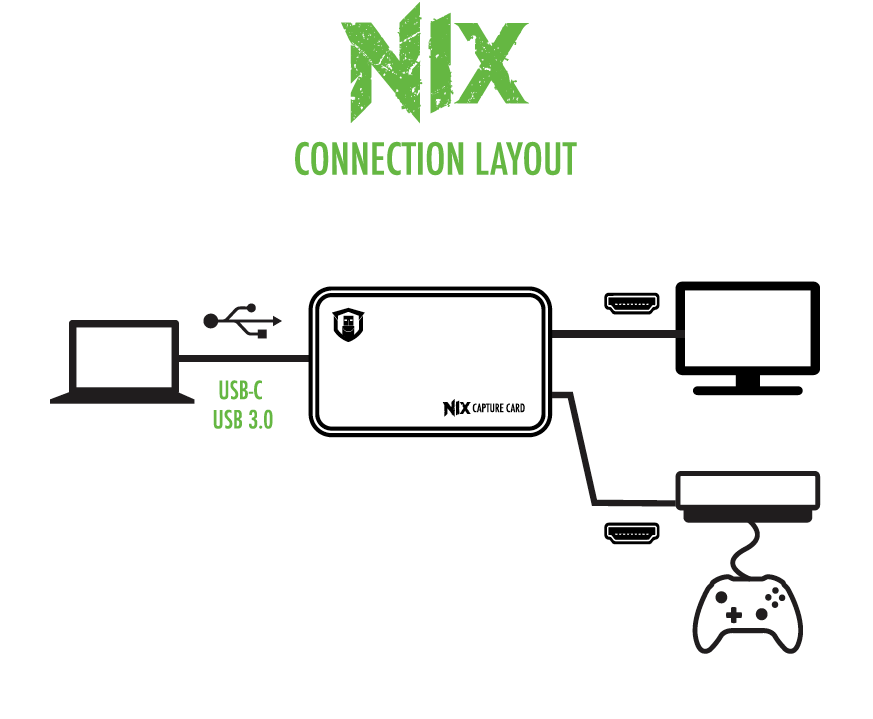 If you experience issues with the capture card, please check the FAQ tab. If you are still experiencing issues after evaluating our FAQ material, please contact support@plugable.com so we can help!

Can I Connect a DisplayPort (DP) Monitor to the HDMI Port on This Device Using an Adapter or Cable?

No, this is not possible. Please note that DisplayPort to HDMI cables (as with any cable involving protocol/signal conversion) are not bidirectional adapters. Such cables will not allow an HDMI output port (such as those on the dock) to function with a DisplayPort input on a monitor.

What Streaming Software Can I Utilize With the NIX Capture Card?

Since the NIX Capture Card utilizes drivers that are baked or already present inside of Windows, macOS, and Linux—essentially appearing as a webcam—it will work with most major streaming software such as OBS, StreamLabs OBS, XSplit, Wirexast, and vMix.

For additional information regarding the streaming software you utilize, if not present in this list, please reach out to us directly at support@plugable.com

Which Port on the NIX Capture Card Do I Connect My PC/Console To?

The NIX Capture Card has two individual HDMI ports: One for "In" and one for "Out".

The "IN" port should be where you connect an HDMI cable from the source (Xbox® One, PlayStation® 4, etc) to this port.

What Is the "Out" Port For?

The "OUT" port can be connected to a display so that you can see a live feed of what is being sent to the "IN" port.

This way you can still view the output from your HDMI source at the same latency as it would be when directly connected to the display without dropped frames or lag.

Which cable inside the box do I use to connect the NIX Capture Card to my computer?

There are three total cables/adapters included inside of the box with the NIX Capture Card. One is a standard USB 3.0 to USB 3.0 cable. This can be utilized on most modern systems, and will allow you to connect the capture card, and communicate with your capture software.

The second cable is unique, as it allows a USB Type-C (USB-C) based system (such as a laptop) with a native USB-C port to connect to the NIX Capture Card. One end is USB-A (which connects to the Capture Card) and the other is USB-C, that you connect to a compatible USB-C based system.

We also include a small USB-C male to USB-A 3.0 female adapter. This can be utilized to combine both the USB 3.0 to USB 3.0 cable, on a system that a USB-C port.

When disconnecting the source HDMI cable from the capture card, and then inserting another new source, the NIX Capture Card doesn't show anything in OBS. How do I fix this?

A bug in OBS can cause this to sometimes occur. The best way to resolve the issue is to right click the "Video Capture Device" source (or the unique name it was given) and select properties.

Inside of properties, just below the "Device" drop down box, you should see a "Deactivate button". Click the Deactivate button, and remove the HDMI cable that is connected to the "IN" port on the capture card.

Wait 5 seconds, and then reconnect the HDMI cable from the source system to the "in" port on the capture card. Once reconnected, right click the "Video Capture Device" source (or the unique name it was given) and select properties. Once inside properties, click the "Activate" button and you should be back up and capturing!

No. The NIX Capture Card only supports a maximum resolution for input and output of 1920x1080 @ 60Hz.

Does the capture card support higher refresh rates for pass-through to my 75Hz, 100Hz, 120Hz, or 144Hz monitor?

No. The NIX Capture Card only supports a maximum resolution for input and output of 1920x1080 @ 60Hz. Even if your display and devices support higher refresh rates, they will not function through the NIX.

With the PlayStation® 4/PlayStation® 4 Pro connected, an image appears on the display connected to the "out" port, but not inside of my streaming software. What should I do?

The PlayStation® 4/PlayStation® 4 Pro system utilizes HDCP protection by default when the console is turned on. To disable this feature, select (Settings) > [System] and then clear the checkbox for [Enable HDCP].

When using a macOS system to capture video/audio from my source device, the audio seems to sound incorrect or "choppy", How can I resolve this?

This is most likely a problem with the Hz rate the audio for the capture card has been configured as. Please follow these instructions:

In the bottom of your OBS Window, there is a frame/section called “Mixer". Scroll through the list and look for the audio input capture line item (usually a unique name you added when adding the Audio Input Capture Source) and click on the “COG Wheel, or Settings Wheel” on the right. Select “Advanced Audio Settings”.

A window should appear showing you the name of the device, the volume bar, and other various settings. Look for the Audio Input Capture item name you configured, and in the column that says “Sync Offset” input 470ms (for some devices the magic number will be between 470-480).

The video should now be synced to the audio being captured.

This document will cover the basic configuration steps for using the Plugable Performance NIX HDMI Capture Card in OBS.

It is important for all aspects of your audio chan to use the same sampling rate for audio. If you have a misconfiguration in those settings, you may get audio that breaks, cracks, or is otherwise distorted in some fashion.

Provided everything was configured correctly, you should now have the NIX Capture Card ready for streaming via OBS. If you encounter issues, please contact us for help. 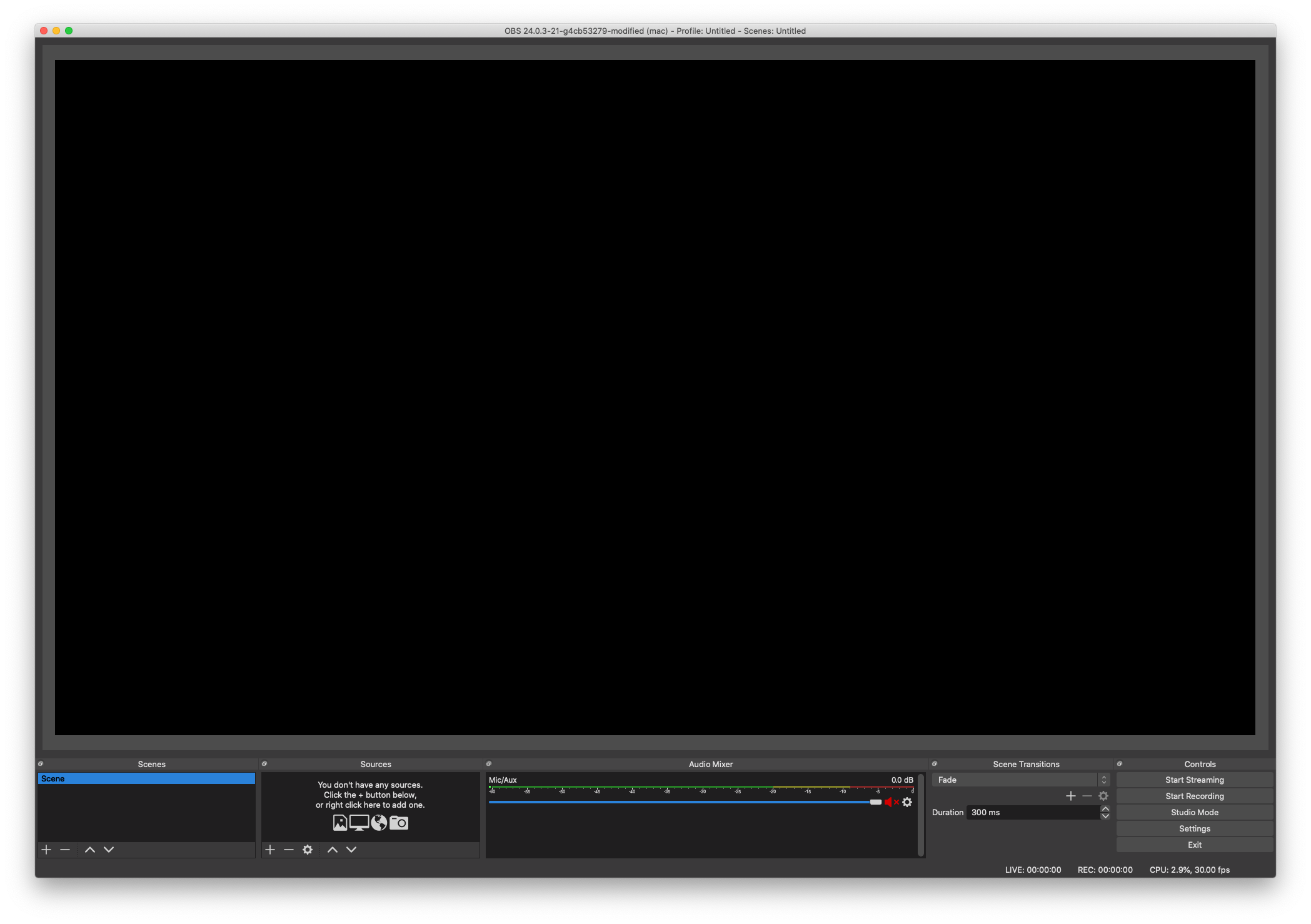 This guide will walk through the steps to initially configure OBS's recording and preview settings.

Congratulations, your capture card is now ready for use in your streaming software!

The capture card is now configured for use in OBS. 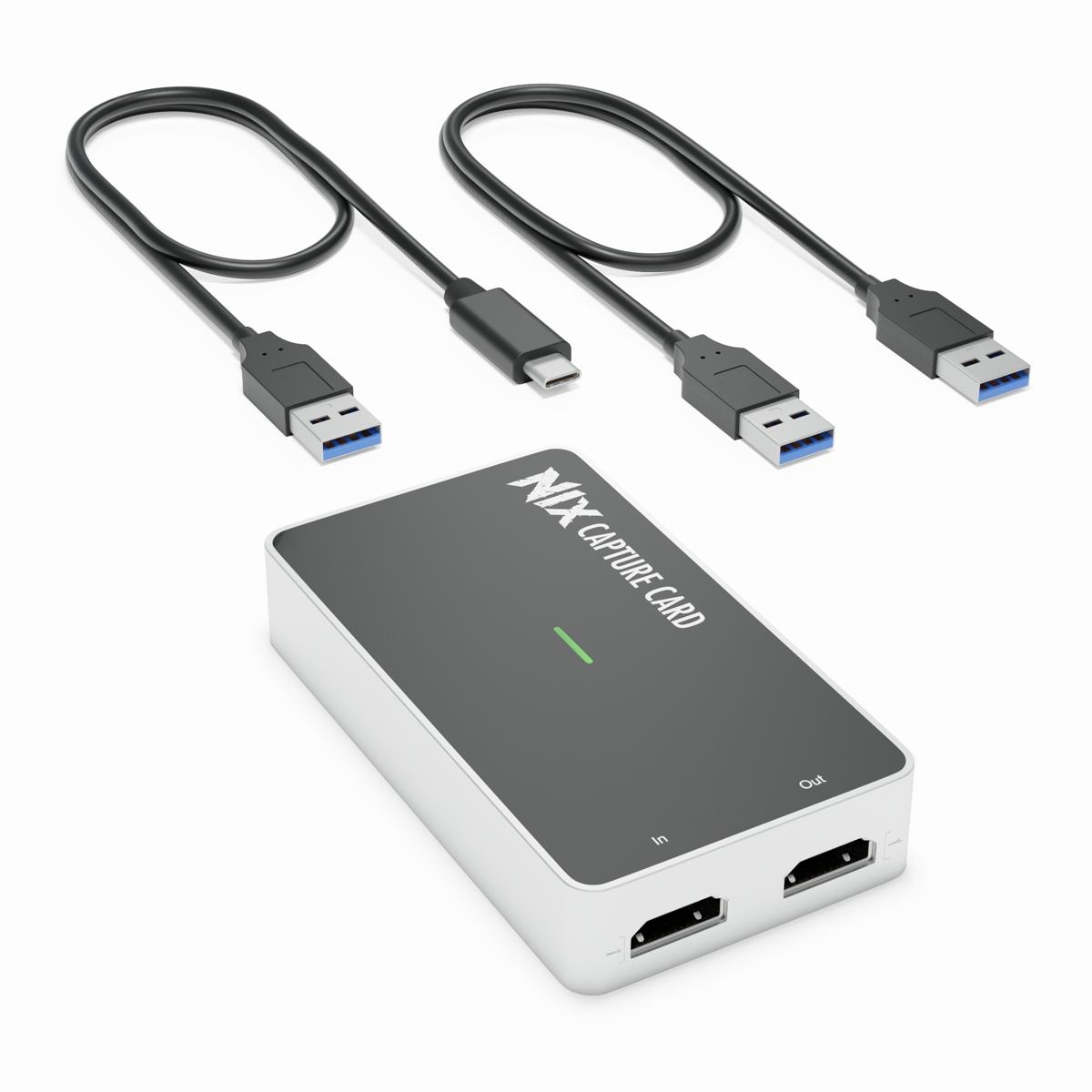