Thunderbolt 3 is the latest version of the hardware interface that has been co-developed by Intel and Apple since early 2011. In its third iteration, which was launched in 2015, Thunderbolt adopted the USB-C connector. This replaced Mini DisplayPort (MDP), improving its interoperability and general compatibility.

Thunderbolt was created to replace the obsolete “FireWire” serial bus communications interface, and also to offer a simple yet versatile solution for the consumer. To achieve this feat, it combines the PCI Express (PCIe) bus standard with the DisplayPort digital display interface into a single cable. In addition to data, Thunderbolt is also capable of delivering DC electricity to power-up devices that need up to 100 watts of power. And while Thunderbolt 3 can provide power, that doesn’t mean manufacturers support it in all instances: check before you buy to ensure what you buy will meet your needs.

Thunderbolt 3 supports bandwidth rates up to 40 Gbps, so it’s easily the fastest port available in the market right now. This translates to transferring a 4K movie in under 30 seconds. It supports 4-lane PCI Express, DisplayPort 1.2, and now DisplayPort 1.4 (using Intel’s latest Thunderbolt 3 controller known as Titan Ridge). Thunderbolt 3 is also backward compatible with the two previous generations of Thunderbolt, although one would need to use adapters for this purpose.

What Can I Use Thunderbolt 3 For?

The short answer would be to connect stuff on your PC or laptop. That could be docks where you can hook up keyboards and mice, data devices such as whole RAID arrays of external disks, or even up to two 4K displays (at 60 Hz) on the same port. Thunderbolt can send high-fidelity audio and 4K video simultaneously, so you won’t need anything else to get media playing on a screen. Thanks to the unprecedented data transfer rates of Thunderbolt 3, it is also possible to enjoy seamless gaming on an underpowered laptop by connecting an external graphics card on the port. As for “daisy-chaining” (connecting devices together in a line), you can link up to six devices and finally hook them all on a single Thunderbolt 3 port. 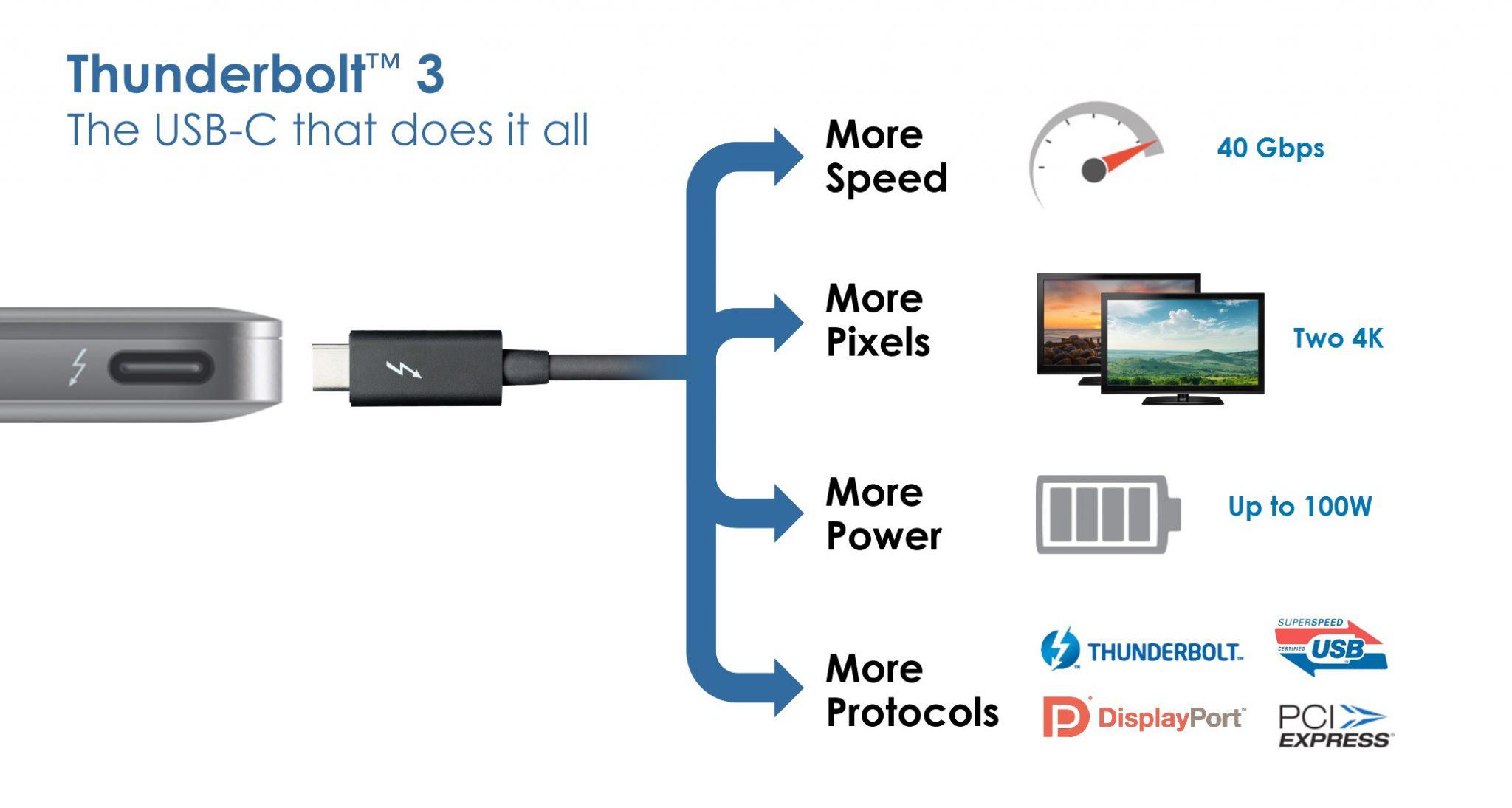 All that said, there’s a wide spectrum of real-life everyday applications where Thunderbolt 3 can make a huge difference for the user. Maybe you are a photographer who needs to transfer large volumes of image data from a removable media to a laptop. Or maybe you are a gamer who needs “power on the go” and likes to use a removable graphics card. Or you may do graphics work and you need to hook up the laptop on a 4K screen, and even two of them side by side. Potentially you could also want to ensure that your smartphone can be charged quickly through the laptop’s ports. Thunderbolt 3 can shine in any of the above, and many other possible applications. Things that were previously impossible due to the bottlenecks that underpin other standards are now possible by using the third generation of Thunderbolt.

How Does Thunderbolt 3 Compare to Other Options?

First of all, it is important to highlight the characteristic and most crucial difference between Thunderbolt 3 and anything else, and that is its versatile nature. Thunderbolt 3 can be used to transfer all forms of data and also power, and can do it in rates that compete directly with connectors that specialize exclusively in one type.

For example, the VGA or the DVI video port standards can carry only video signal, transfer at maximum bitrates of 8 Gbit/sec, and support up to 2K resolutions. The story is more or less the same with FireWire and Ethernet technology. The latter supports up to 1 Gbps, and can’t transfer power at all.

When it comes to choosing between HDMI (High Definition Multimedia Interface) and Thunderbolt 3, HDMI 1.3 offers a throughput of 8.16 Gbps. Version 1.4 also supports audio, and the second generation of HDMI increased the bandwidth to 18 Gbps. As for resolutions and refresh rates, HDMI 2.0 can output 1080p at 144Hz, whereas Thunderbolt 3 supports up to 240Hz on FullHD, or 120Hz on 4K. So, HDMI 2.0 can’t even compete with Thunderbolt 2, let alone Thunderbolt 3. 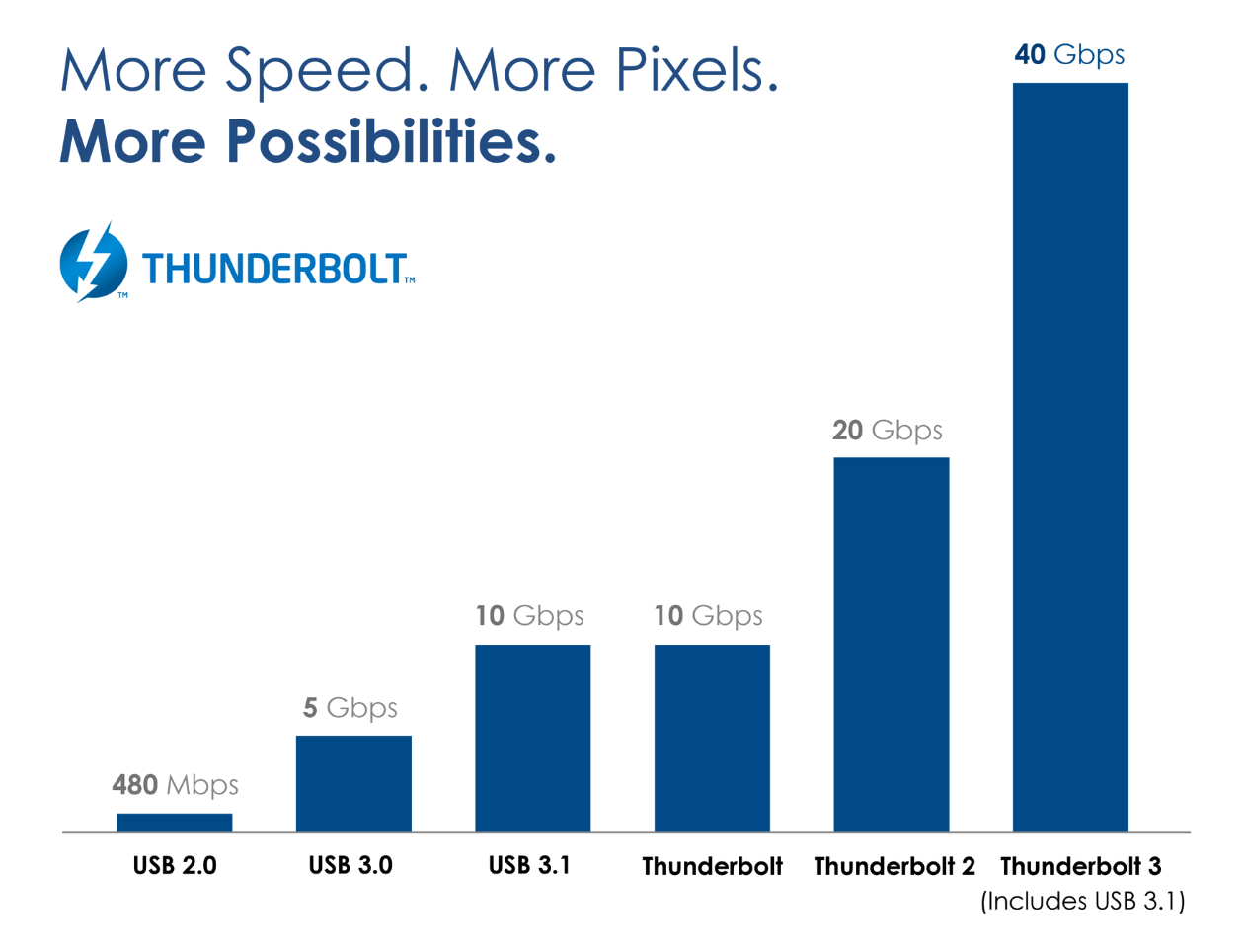 Considering the performance of the omnipresent USB 3.0 and 3.1 serial bus standards, Thunderbolt 3 still fares much better. USB 3.0 features a data transfer rate of up to 5 Gb/sec, while 3.1 takes that up to 10 Gb/sec, still four times less than what Thunderbolt 3 can do. The most recent USB 3.2 Gen 2×2 is another incremental improvement, sporting 20 Gbps of bandwidth, still far behind Thunderbolt’s 40 Gbps. USB 3.0 can deliver power transmissions of a maximum of 7.5 watts, while USB 3.1 and above support up to 100 watts–enough to charge most laptops–using a new standard known as USB Power Delivery, or “USB PD”.

USB4 is the only specification that can compete with Thunderbolt 3, and the reason for this is that USB4 is actually based on Thunderbolt 3. Intel decided to make the Thunderbolt 3 a royalty-free standard to OEMs and hardware manufacturers, and they released its specifications in 2018. A year later, USB4 was released by the USB Implementers Forum (USB-IF). And while the specs for USB4 and Thunderbolt 3 may look the same, Thunderbolt 3 always carries PCI Express (PCIe) signaling, whereas with USB4 it’s up to the manufacturer whether to support PCIe traffic. As a result, USB4 hosts, depending on their design, may or may not support Thunderbolt devices.

Thunderbolt 3 Compatibility with Other Standards

In terms of compatibility with other standards and protocols, Thunderbolt 3 is backward compatible with the previous two generations as long as an adapter is used since the ports are different. As for the USB protocol, Thunderbolt 3 can work with USB 2.0, 3.0, 3.1 Gen 2, 3.2, and, in some cases, USB4. Of course, the speeds are limited to the quickest protocol that is supported by the connecting cable, and the quickest protocol supported by the connected device. For example, a USB 3.0 stick connecting to a Thunderbolt 3 USB-C port will work on USB 3.0 speeds.

When it was announced that Thunderbolt 3 was to become royalty-free, other manufacturers besides Apple and Intel didn’t hesitate to adopt it on their products. At this time there also weren’t any alternatives that could compete with it. In addition, Thunderbolt 3 enabled laptop manufacturers to make their products thinner. Acer, Asus, Clevo, HP, Dell, Dell Alienware, Lenovo, MSI, Razer, and Sony all released notebooks that supported Thunderbolt 3 almost immediately, while Gigabyte rushed to throw the first Thunderbolt 3 motherboard in the market as well.

Naturally, we have gone a long way since 2015, and today there are hundreds of products that support Thunderbolt 3, and many types of hardware manufacturers who have adopted it as well. There are notebooks, laptops, computers, storage devices, motherboards, docks, eGFX units, cables, camera/surveillance storage devices, add-in-cards, displays, docks of all kinds, adapters, expansion interfaces, and more.

Because both the USB and the Thunderbolt 3 standards use the same USB-C port, it can be confusing as to which of the two is supported by a specific product. If you don’t have access to the vendor’s technical specifications look for the characteristic Thunderbolt 3 symbol, a small lightning symbol. If you don’t see it then it’s a USB port.

Will Thunderbolt 3 Be Compatible with Devices in the Future?

The big question you may be asking: is Thunderbolt 3 future-proof, and up to what point?

By making the standard royalty-free and releasing the technical specifications for it in 2018, Intel has laid the groundwork for boosted adoption rates. USB4 is coming as a confirmation of this, and while Thunderbolt didn’t manage to dethrone the USB standard all these years, it is good to see the potential for increased compatibility. However, this will actually come down to whether or not the USB4 manufacturer uses PCIe. This missing piece is the difference between whether or not two products will even be compatible.

Intel refreshed Thunderbolt 3 to bump the support from DisplayPort 1.2 up to 1.4, but unfortunately chose not to support this standard on Macs, even though the hardware is capable of it. Devices with support for DisplayPort 1.4 will see maximum video resolutions increase from 4K at 60Hz to 8K at the same refresh rate, plus HDR. Also in version 1.4, 4K video can reach up to 120 Hz. With Thunderbolt 3 already prepared for a continual climb in the video resolutions and refresh rates preferred by consumers its position as the standard is fairly secure for the next few years.

Thunderbolt 4 was confirmed by Intel during its CES 2020 presentation. There’s not much known about the upcoming fourth generation of Thunderbolt, other than the fact that it’s going to have the same bandwidth as the previous version, and may be based on PCI Express 4.0. It is suspected that Intel will attempt to maintain compatibility with Thunderbolt 3, USB4, and USB 3.x. With Thunderbolt 4 expected to hit the market together with USB4, a new wave of devices is going to take over larger chunks of the market share, so Thunderbolt 3 will become even more relevant.

If you’re wondering whether or not you should skip the Thunderbolt 3 offerings and wait for USB4 or Thunderbolt 4 devices, you shouldn’t be. Thunderbolt 3 is well positioned to hold onto its lead as a connectivity standard. It continues to win the speed race at 40 Gbps alongside USB4 and Thunderbolt 4, and with its minimal compatibility hurdles it may well remain in this position for a few years. There continues to be some confusion over USB-C and Thunderbolt 3, and some manufacturers even contribute to this. And while the benefits outweigh the hurdles when it comes to Thunderbolt 3, take our tech team’s advice and do your homework before you buy.

If you have any questions about Thunderbolt 3 compatibility between your laptop and Plugable’s Thunderbolt 3 products, please reach out to us at support@plugable.com — we’re here to help!