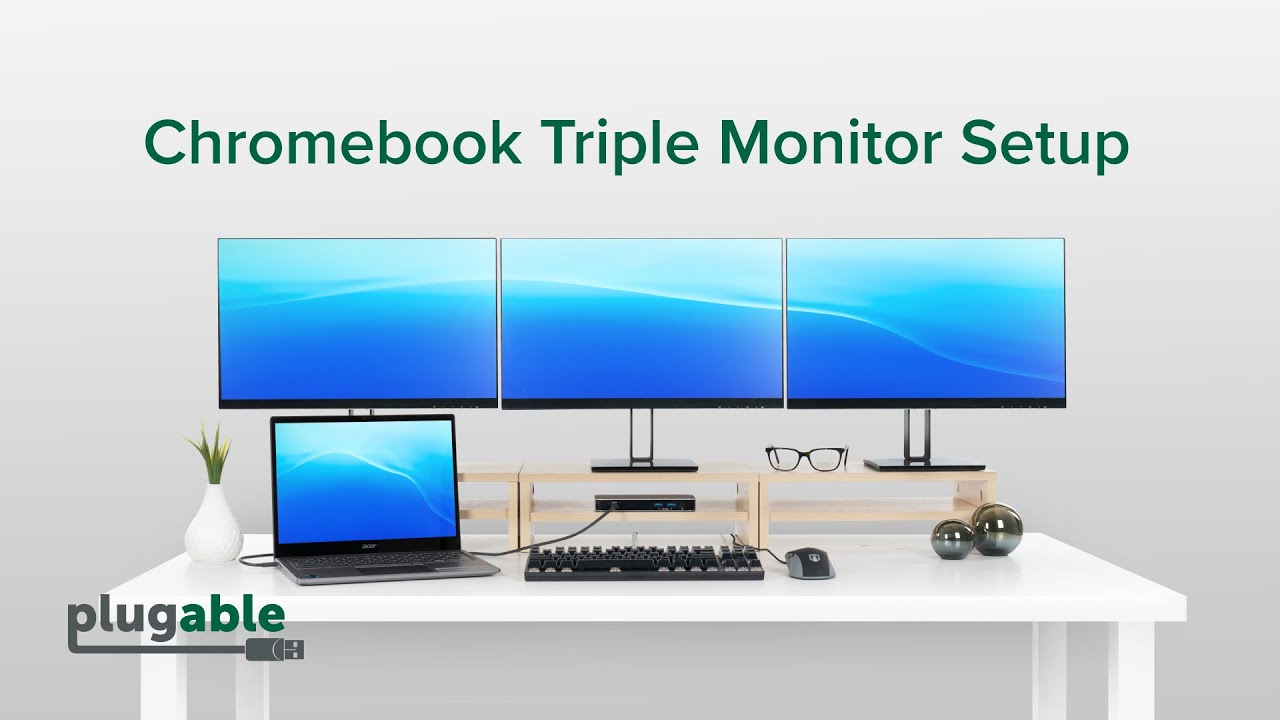 We have something exciting here, a laptop with a whole bunch of firsts. The Acer Spin 713 is one of the first Chromebook laptops to support Thunderbolt 4, and it does that in the context of Intel's Evo platform.
The Evo platform has a number of different kinds of hardware features that are standardized. So if you buy a laptop that supports Intel Evo, you're going to get all of these features, and one of those key features is Thunderbolt 4.

The other thing that's interesting about this laptop is that it's a Chromebook laptop. With Chrome OS, of course, you sacrifice the ability to run any kind of native apps, but these days, most of what we do is on the web. These sorts of systems are much more secure at a lower cost. Chromebooks have really taken off in the last year and it's kind of exciting to see some really high-end Chromebooks come out.
Here’s another big first. We've got the Chromebook screen and we've got three external displays attached. We've never had a Chromebook that could do this before. And every one of these three displays is running 4k resolution at 60 Hertz. So how does the Acer Spin 713 do this? With a pretty high-end feature set. The Intel Iris Xe graphics and the Evo platform are providing all the basic capabilities. And Acer is just one of the first Chromebook makers to expose all of that with a Chrome OS attached or installed on the system.

So how are the three displays specifically attached? Acer has had a Chromebook Spin 713 line for a while, so be careful. You’ll have to buy the new enterprise version. It's $700 retail and it has the Intel Evo platform, which is an Intel 11th generation CPU.

One of the 4k displays is connected to the HDMI port. That's exposed right out of the Chromebook. The other two displays are being attached through a Plugable TBT3-UDC3 Docking Station. So this is actually a Thunderbolt 3 dock that supports HDMI and DisplayPort out of the back, it also includes a display port to HDMI adapter. So you can get dual HDMI out of the back of the dock, and you get a whole bunch of extra connectivity and ports, including extra USB ports, wired Ethernet, and it fully charges. And certainly, for this Chromebook, it provides more than enough power to charge at the full rate. So if you only want two displays, all you need is a single cable back to your Chromebook to charge and get two 4k displays at 60 Hertz.

There's a reason why Chrome OS has taken off. People are more worried about security. They are having to live on the web, especially when moving between home and the office. You really want all of your applications to be web applications so you're not worried about if the data is on this laptop or that laptop, this drive, or that drive. Once you make that conversion to web-based applications, there's no reason not to use a Chromebook. And in fact, it eliminates all these worries about what the software is going to do to me when I install it. You don't need to run antivirus software on a Chromebook because you don't install stuff on a Chromebook.

But Chromebooks have historically had a lot of limitations in terms of really being able to create a powerful information worker set up like this. I mean, three displays is definitely a power user, but two displays is the standard anymore.

With Chrome OS and these new platforms that support Thunderbolt 4–which is backward compatible with Thunderbolt 3 and USB-C–you can use great docking stations like the Plugable TBT3-UDC3 to get a really awesome workstation.

Take a closer look at the Plugable Thunderbolt 3 and USB-C Dual Display Dock with 96W Host Charging (TBT3-UDC3) featured in this video.