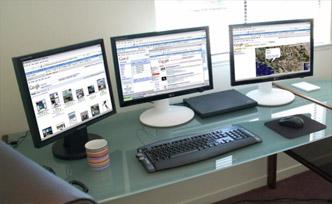 DisplayLink has released their new Windows driver version 7.7 M0. For most users, we’re recommending they stay on DisplayLink’s mature 7.6 M2 driver series for the time being, but this release does improve performance especially for 4K Ultra HD (up to 3840×2160) USB multi-monitor graphics adapters like the Plugable UGA-4KDP.

This release is also the first that is Windows Vista or later only. Windows XP users will need to stay on the Windows 7.6 driver series (or earlier). Windows’ graphics driver architecture was very different in Windows XP, causing DisplayLink’s driver to be “two drivers in one”. Dropping XP support in 7.7 allows DisplayLink to focus on and optimize for newer Windows versions. Note that for systems automatically downloading from Windows Update, the correct version will automatically be downloaded for you.

We’ve been testing this release since the betas, and had seen stable results with the betas. With the final 7.7 M0 release, however, we’ve seen problems during install and with missing cursors after install. Because the performance differences are most noticeable in modes above 1920×1080, and the previous driver version 7.6 M2 has proven most stable, we’re only going to point users of our 4K adapters immediately to this new driver. For sub-4K adapters, 7.6 M2 is well proven—and of course is essential for XP.

Monitor EDID was incorrectly interpreted, if the monitor id contained an underscore (_). (17606)

Audio output might not switch to default after disconnecting headphones from DisplayLink device in hibernation (S4). (17401)

Occasionally a DisplayLink monitor could be blank after resuming from power saving mode. (17554)

Ethernet UDP performance might drop when playing video and audio over a DisplayLink device. (17579)

Wake on LAN sometimes doesn’t work when DisplayLink device is connected at USB 3.0. This is a regression introduced in 7.6 M2. (17865)

Video and/or Ethernet not available after power state changes on some platforms. Ethernet could show a Yellow “!”, with Error Code 43, in device manager (17896, 17047)

If multiple DL-5xxx or DL-3xxx devices are connected, one device can fail USB enumeration resuming from S4 when connected to USB 2.0 on Windows 7. (17835)