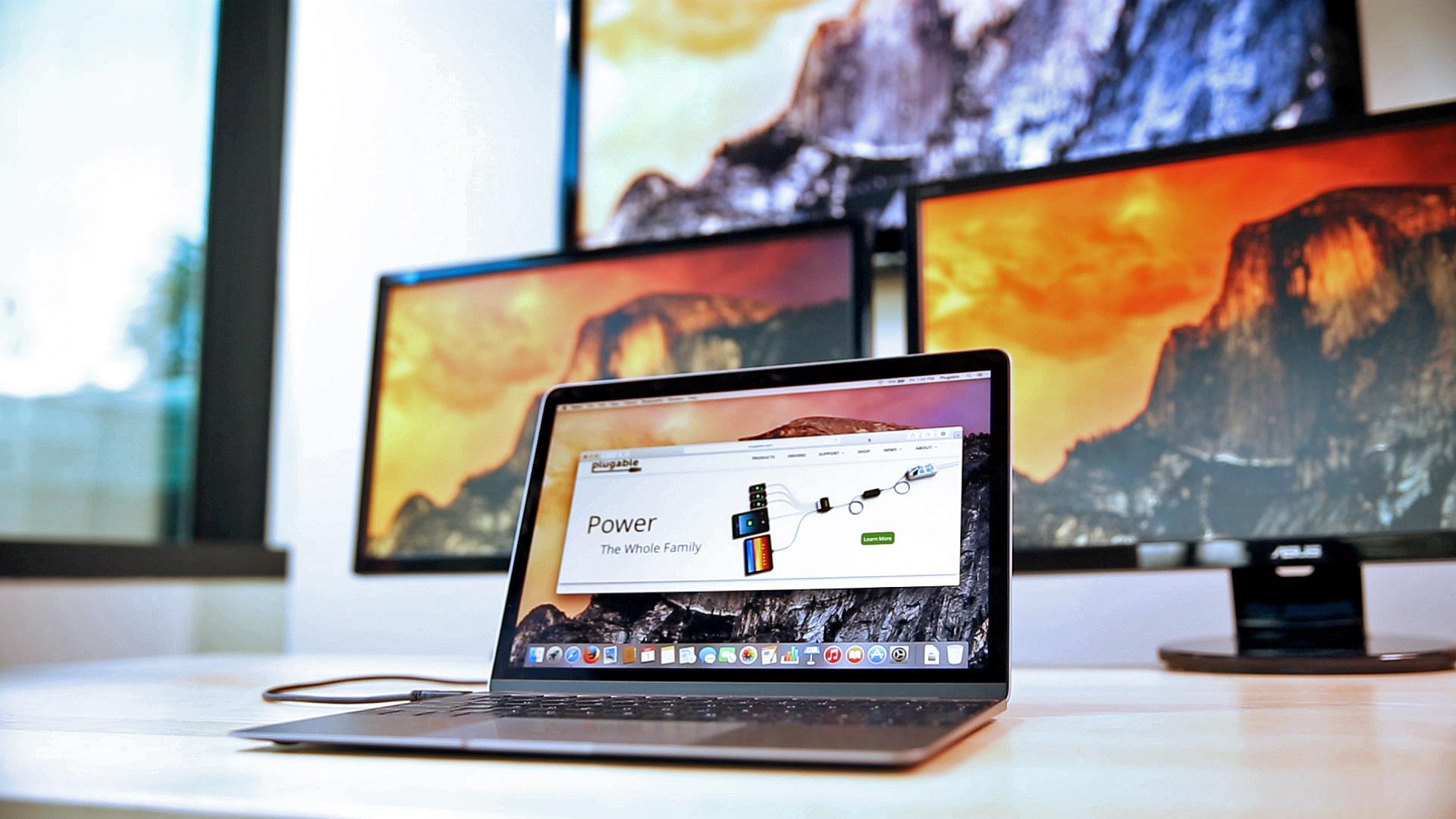 Some secondary display products no longer work on macOS 10.13.4, including all products using DisplayLink technology like USB docks and graphics adapters, and all apps which enable using a tablet as a second monitor. It’s unclear if Apple will be providing fixes. The only available solution currently is to disable updates and stay on macOS 10.13.3.

Update: February 26th, 2019:
DisplayLink has released an updated driver for macOS Mojave 10.14 (DisplayLink driver version 5.1) that provides some important big fixes. While we are not changing our list of officially supported platforms at this time, the latest version is recommended for all users running macOS Mojave with DisplayLink-based devices.

In addition, on December 5th, 2018 Apple released an update to macOS Mojave version 10.14.2 that resolves the problem we described previously of DisplayLink-attached displays not working as expected with MacBook Pro 2018 or MacBook Air 2018 models.

With the above fixes in place, for most users running macOS Mojave version 10.14.2 and DisplayLink driver 5.0.1, DisplayLink devices should again operate at the same capabilities that were present prior to the release of macOS High Sierra 10.13.4.

While Plugable is glad that this issue has been resolved, please be aware we are not changing our list of officially supported platforms at this time.

For users wishing to remain on macOS High Sierra, OS 10.13.3 will continue to offer the best experience. At this time, there is no indication that the fixes to macOS in 10.14.x will be backported to macOS High Sierra 10.13.4 through 10.13.6.

Update: September 28, 2018
On September 24th, Apple publicly released the next major version of macOS, version 10.14 (Mojave). On most Apple Macs running Mojave that have the latest release of DisplayLink’s software driver version 5.0 installed, DisplayLink functionality has been restored. However, there is a known issue with MacBook 2018 systems that prevent proper operation of DisplayLink-attached displays.

In our testing of both Mojave and the new driver we have found that overall things work well, however there are a few important limitations of which to be aware. In addition to the incompatible 2018 MacBook mentioned above, some users with other Mac models are reporting issues getting their displays to output as expected. This may be solved by uninstalling and reinstalling the driver, but a definitive cause is unclear at this time. Also, Mac systems now support a maximum of 3 DisplayLink displays (in previous versions of macOS, the limit was 4).

The loss of DisplayLink functionality in macOS 10.13.4 was incredibly disruptive for our customers, so please note that while these developments are promising, we are not changing our list of officially supported platforms at this time.

At this time, there are no updates for those running macOS High Sierra 10.13.4+ to re-enable full DisplayLink functionality. It is unknown if Apple will choose to restore this functionality to High Sierra, however it appears unlikely that they will do so. The DisplayLink driver version 4.3 is still available for 10.13.4+ users as a workaround.

For Mojave users who wish to install the DisplayLink version 5.0 drivers, we have a step-by-step guide to the process here -> https://plugable.com/drivers/displaylink/mac/

DisplayLink has posted an update on their support page (https://support.displaylink.com/forums/287786-displaylink-feature-suggestions/suggestions/33252664-macos-high-sierra-10-13-4-and-mojave-10-14-early) that confirms support for DisplayLink devices on most* systems running macOS 10.14 will be re-enabled with full functionality when used with the newly released DisplayLink version 5.0 Beta driver.

(*The Mid 2018 MacBook Pro may not support DisplayLink using the 5.0 Beta driver with the initial 10.14 macOS release, but a fix for this platform may be available in the future.)

Support for DisplayLink in macOS versions 10.13.4-10.13.6 and higher has not been restored by Apple, and it is unknown at this time if this will change in the future.

While we’ve had positive results testing our DisplayLink-based products in Mojave, please note that for now Plugable isn’t changing our list of officially supported platforms at this time.

Update: August 8, 2018
Apple has released a beta version of the next release of macOS (10.14, Mojave) which resolves compatibility issues with DisplayLink devices. When a system is updated to this pre-release version of macOS 10.14 and the DisplayLink Mac driver version 4.3 beta 5 is installed, full DisplayLink functionality is restored.

We hope these fixes remain in place, but at this time we do not know if these changes will be preserved in the final public release of Mojave due in Autumn of 2018. While user reports about Mojave have been generally positive, running a beta version of an operating system is not a solution for most people, because by their nature beta operating systems can have bugs that cause unexpected problems or even lost data. (For the brave souls who may be considering installing a beta OS, be sure you’ve got a verified, up-to-date backup of your system!)

So while Plugable does not recommend installing this beta OS for most users, we wanted to mention nonetheless that progress is being made.

Update: July 17, 2018
DisplayLink has indicated they are still making progress on this issue, but there remains no complete solution to the macOS DisplayLink issue available for users of macOS version 10.13.4, 10.13.5, 10.13.6 or public beta versions of the next release of macOS 10.14 Mojave.

DisplayLink has stated they are still committed to finding a long term fix to restore functionality, and has more information in their most recent update. However, they have not shared any additional details on the expected time frame for this solution.

As there are new developments, we will again update this post.

Update: May 1, 2018
DisplayLink released an update on this issue; click the link to read their full statement: “Our team has made some solid progress towards finding a solution which would restore extended display support in a future release of macOS. We are still unable to provide a time frame or a date for release of this solution.

Meanwhile, we have been developing a partial workaround solution which would add one extended USB display (up to 1080p) on macOS 10.13.4. We are aiming to release a preview version of this driver in around 7 to 10 days. The precise date depends on how the solution performs under deeper and wider testing, and how long it takes to resolve remaining issues. We expect the driver to enable one extended 1080p screen, and one cloned screen connected to a DisplayLink device. There may be some other functional limitations.”

Update: April 26, 2018
DisplayLink released an update on this issue; click the link to read their full statement: “DisplayLink has committed significant resources to finding a way to restore extended mode display support in a future release of macOS. We have made solid progress towards identifying a solution, however our team needs to complete more work before we can communicate a release plan for a driver that will restore extended mode displays.”

While this is potentially encouraging news, no further details or timeline are provided. (DisplayLink has not shared any additional details with Plugable at this point.)

Recently we wrote that the beta version of the next release of macOS, version 10.13.4, would cause USB video adapters and USB docking stations based on DisplayLink technology to stop working. This only affects Mac users, it does not affect those running Windows or Chrome OS.

Apple released the final version of 10.13.4 in the evening of 3/29/2018 and unfortunately the problem has not been fixed. If a system is updated to the final public release of macOS 10.13.4, all graphics devices which aren’t directly controlled by the system’s graphics processor or AirPlay will stop working.

As a result we strongly recommend that any Plugable customer using a DisplayLink-based product not update to 10.13.4. For advanced users, reinstalling macOS 10.13.3 and the necessary DisplayLink drivers should restore functionality. However, this is a time-consuming, complex process that isn’t for everyone.

To disable automatic update to 10.13.4, uncheck the two highlighted boxes in the screenshot below. The boxes to uncheck (disable) are “Download updates in background” and “Install macOS updates” These are found in the “App Store” portion of “System Preferences” within macOS. 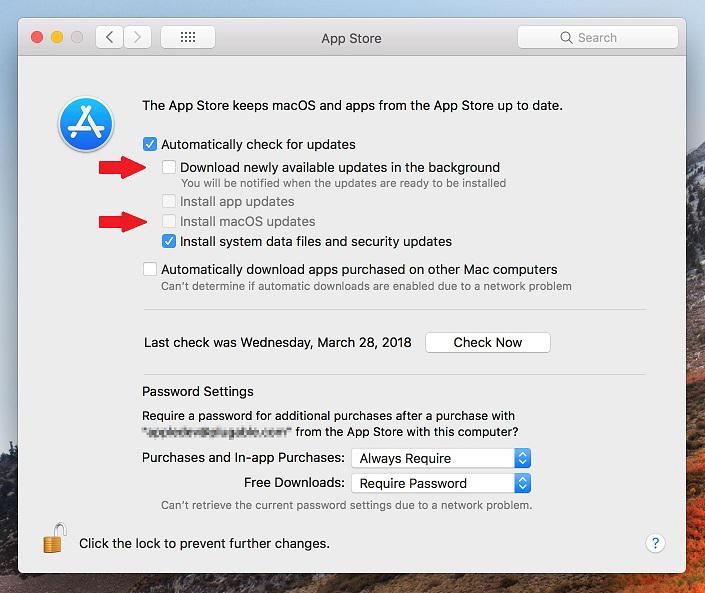 Are docks from other brands affected by this OS update?
Yes, all brands of USB docking stations which use DisplayLink chips and drivers are affected. This includes Dell, Lenovo, Toshiba, Targus, Kensington, Anker, StarTech, etc. Regardless of brand, if the dock uses DisplayLink technology for graphics output, it will no longer function as expected after updating to macOS 10.13.4.

Has Apple permanently disabled DisplayLink Support?
Not that we know of, but they’ve not made any statements on timeframe or commitment to fix.

What is DisplayLink doing?
While the primary issue is out of DisplayLink’s hands, DisplayLink has released a beta driver version 4.3 that will allow DisplayLink-powered displays to function in what is known as ‘clone’ mode.

When using clone mode, the image from the primary display (either an internal laptop display or an external display connected to a built-in video output not using DisplayLink technology) is ‘cloned’ to the DisplayLink-powered display. This will happen transparently and there will be no ability to control this behavior via the ‘Displays’ preference pane. The resolution of the DisplayLink-powered displays will match that of the primary and will scale and/or letterbox as necessary.

The beta driver (version 4.3) can be downloaded from DisplayLink directly here -> http://www.displaylink.com/downloads/macos

Is there a way for users or organizations to request that Apple fix the issue?
For those with an Apple developer ID, DisplayLink suggests reporting the issue to Apple, referencing existing bug ID #37385102 to help raise the priority of the issue:
https://developer.apple.com/bug-reporting/

Is this a temporary or permanent situation?
We don’t know. We understand that the current situation will be extremely frustrating for our customers. We are taking every step we can with DisplayLink and Apple. We will update this blog post with updates as we have them.

Are there any other options to add additional displays to my 10.13.4 Mac?
It depends. Without the ability to use virtual graphics technologies like DisplayLink and others, Mac systems are limited to either the number of monitors natively supported by their system’s graphics adapter (“GPU”) or the number of display outputs on their system, whichever is lower. We’ve written a blog post with an overview of how many monitors are supported by each type of USB-C and Thunderbolt 3 Mac system and information on how that can be accomplished, along with additional details about options for legacy MacBooks with USB 3.0/USB-A and Thunderbolt 2 ports.

If you have any additional questions, please let us know in the comments below.